History and Tidbits of Manasota Key and Nearby Area

As long as 12,000 years ago, native American tribes (Calusas) lived throughout Southwest Florida including Englewood. Human skeletons, animal bones, spears and Indian mounds have been found throughout the area.

With the discovery of this continent by the Europeans in the late 1400’s, exploration slowly brought more visitors. Hernando de Soto, Ponce de Leon, Panfilo de Narvaez and others explored Florida in search of gold. They found little, but paved the way for others to come.

Next Cuban, Bahamian and Spanish fisherman came to fish the fertile waters of the Gulf of Mexico, inlets and bays including Lemon Bay.

After two and a half centuries of Spanish rule, Florida became the 27th state in 1845.  Modern day Englewood was founded on 2000 acres by the Nicholas brothers who intended to establish a city surrounded by lemon groves. The winter frost of 1894 and 1895 destroyed the trees throughout Englewood.

The strategy to promote Englewood as a residential area with an abundance of hunting and fishing in a carefree environment.

Today, Manasota Key and Englewood’s climate inspire the description “Gem of the Suncoast”. With year round events, resplendent parks and miles of beautiful beaches, Enjoy your carefree vacation!

Manasota Key is known for finding several varities of fossils.

If you keep your eyes peeled you can find nice fossil specimens. Manasota Key beaches are replenished daily with seashells, and fossil material, including land and marine animals. At one point The coast extended 70 miles further out than what it is today. Thus accounting for the mix of land and marine animal fossilized remains getting washed up on the shore. 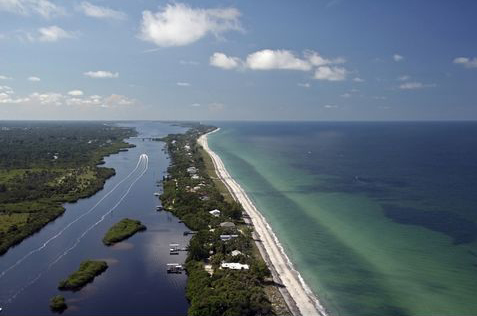 The Pirates and Ship Wrecks of Charlotte Harbor

During the 18th and 19th century Charlotte Harbor was the home port of refuge for several pirates.

There have been several notable ship wrecks in Charlotte Harbor, some reportedly carrying treasure.

Many researchers and historians claim that Florida contains
more buried and sunken treasures than any other state. They have also put a price tag on these treasures, which amounts to a cool $165 million (1964). Florida, like all other states, has a fascinating and romantic history. Seven different flags have flown over her, not to mention the black flag of the pirates. Florida became the haven of many notorious pirates, including Blackbeard, Lafitte, Gasparilla, Kidd, Rackham, Bowlegs, Bonnett, and possibly even Morgan himself. They roamed the waters of the Caribbean Sea, and captured every ship in sight. Often, they brought their loot back to Florida, and buried it on some lonely shore. When they finally died, the location of their hidden wealth died with them. The majority of all buried treasure in Florida is the work of pirates. 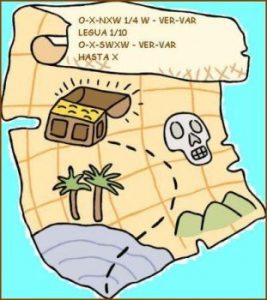 Numerous wars have been fought in Florida and upon the waters
around her. Men hastily buried their wealth when being pursued by the enemy. Valuables were lost or misplaced when the fighting started and were never found again. Naval battles accounted for the sinking of many ships with valuable cargoes, their resting-place to be forgotten in time. Some very valuable treasures were lost during the many wars in Florida.

Florida has survived through hundreds of hurricanes in the past
four centuries, but many ships around her have not. From the year 1500 to 1960, hurricanes have sunk their quota of treasure-laden ships. These wrecked ships represent all nations, but the majority of them are Spanish galleons.

They carried gold and silver from the New World to the Old, only to have their contents deposited on some jagged reef off Florida. Many gold doubloons and pieces-of-eight are awaiting a lucky finder on the Florida reefs.

Actually, there are two types of treasure hunting; buried treasure merely requires a shovel, but it is advisable to use a metal detector
if success is to be achieved. Hunting sunken treasure becomes more expensive and complicated. Diving gear is needed and of course a boat is required. Only an experienced diver should go after sunken treasure. Luckily, Florida contains both types of treasures, thus enabling the prospective hunter to choose from a larger variety. 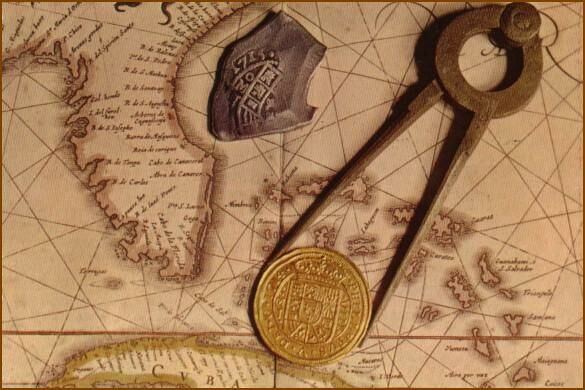